Here's a couple of jpeg's for draining the ATF. This one shows the bottom of the pan as viewed from the passenger (right) side. This one shows what type of wrench to get the drain plug off. The wrench is a 5 millimeter "hex key" or "allen wrench". Sometimes the drain plug is stuck in pretty tight & if so, you can get it off with "Vise-Grip" pliers directly on the external circumference of the plug. Measure how much old fluid comes out & add the same amount of new when you refill it. You put the new fluid in thru the transmission dipstick tube from above, using a long slender funnel. Check the level after it has been driven to operating temperature & measure it while running, in Park, on a level surface. It should be at the top mark of the dipstick markings, the lower mark is for cold. It's only about one pint difference between the two marks. The total transmission fluid capacity is about 7.5~8.1 quarts but most of the old fluid is retained in the torque converter & can't be drained by conventional means, but there are other ways to drain it but I won't get into that now. At some later time I will add the replacement for the pan gasket & filter change. It looks pretty straight forward, the filter is held in place with 3 Torx T-27 socket head cap screws.

Now, as for changing the fluid on an older tranny which hasn't been changed in a long time: it could lead to the ultimate failure of the transmission. What happens is the new fluid is highly detergent & will clean out the old crud in the transmission. The friction surfaces on the clutch packs can also disintegrate. This crud can now seek its way in to the tiniest passages of the valve body & foul things up. On the other hand, if the miles on the car exceed 100k & it shifts funny & there's no record or signs that the fluid has ever been changed, then leaving it as is might not be the best for it either. Don't take this as a suggestion, but if it were mine, I would change the fluid, maybe only 3 or so quarts at a time, & stagger it over many weeks to ease the "shock" of putting new fluid into an old tranny. If it looks like it is going to hold up after several drain/fill cycles, then proceed with the new pan gasket & filter change. I think you'll find that new fluid will smooth the shifting better. One thing I found with mine is that even though I thought I filled it properly it shifted very harshly when cold, which as it turns out, the fluid level was still low. After I topped it off, it started shifting smoothly again.

The fluid spec for the ZF4hp22(eh) transmission is Dexron III. When selecting the fluid, I highly recommend using a full synthetic ATF such as Amsoil, Mobil 1, or Redline. Of these 3 choices I consider Amsoil to be the best. (e-mail me for more info on that: dgnrg@nmia.com). Do the research & decide for yourself.

Here are fluid spec's for the ZF 5-speed automatic transmissions: 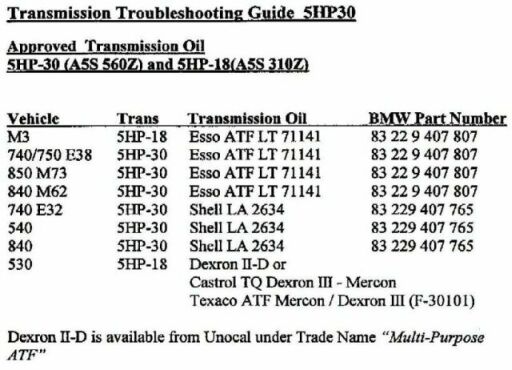 Here's another spec for fluid types:

Back to Gale's BMW repair page