If you've already done the "Cable Fix" and still have seat twist/tilt problems, & if there's a clicking or crunching/grinding noise when powering the seat position(s), then one or more wormgears are probably stripped in either the left or right seat gearbox:

To replace, remove the headrest (it comes out if pulled straight up firmly). Remove the 2 screws on either side of the seatback: 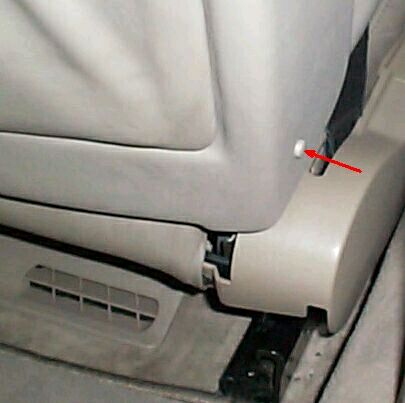 The back panel of the seatback will pry off from the bottom edge, pull straight out & lower a few inches to clear the upper clips: 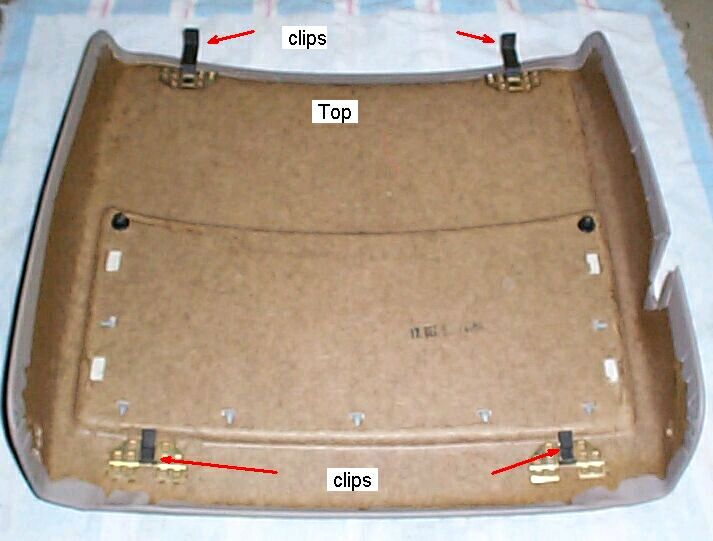 Snip the cable ties for the headrest motor power cable & unplug the socket. The seatback will now unlatch by pressing the bottom latch levers downward. I found it was easier to unhook the tops of the springs: 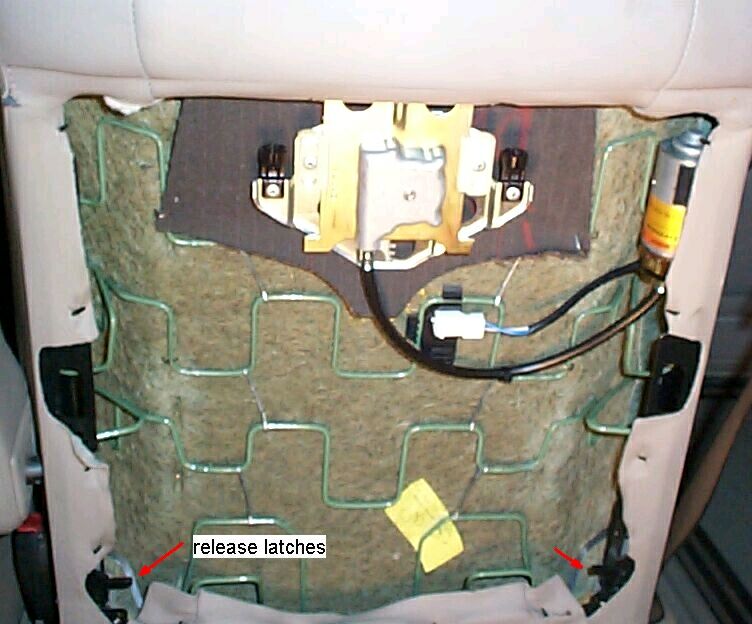 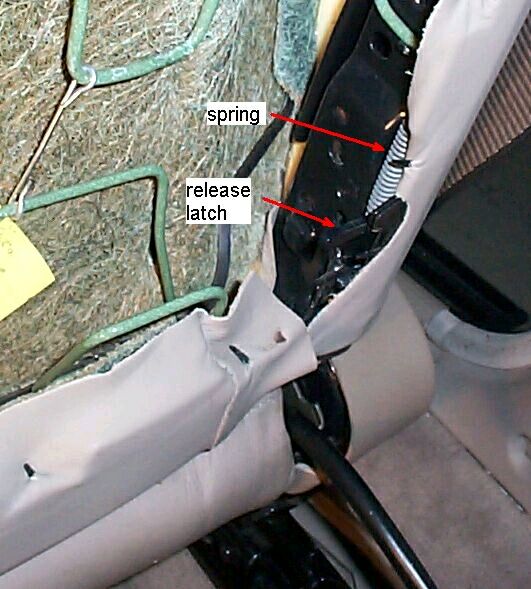 The seatback will lift off of the arms on either side & come clear off.

Slide the seat bottom forward to expose the Torx head bolts on the rear seat rails & remove them, if you don't have a Torx socket (E60?), a 7/16" or 11mm 12-point socket will work. Remove the seatbelt lug & wire cable underneath the seat (see "Seatback Twist" section for more details).

With the seat bottom removed, peel back the leather from the side to expose the mounting screws & circlip for the gearbox:

Remove the gearbox cables from the motors (again, refer to the seatback twist section) & snip the cable ties holding the drive cables to the seatbottom. Chuck the end of the rear cable with a cordless drill & drive the seatback bracket to the fully reclined position. Pry the gearbox free from the side of the seatframe & pull it out from the back of the seat: 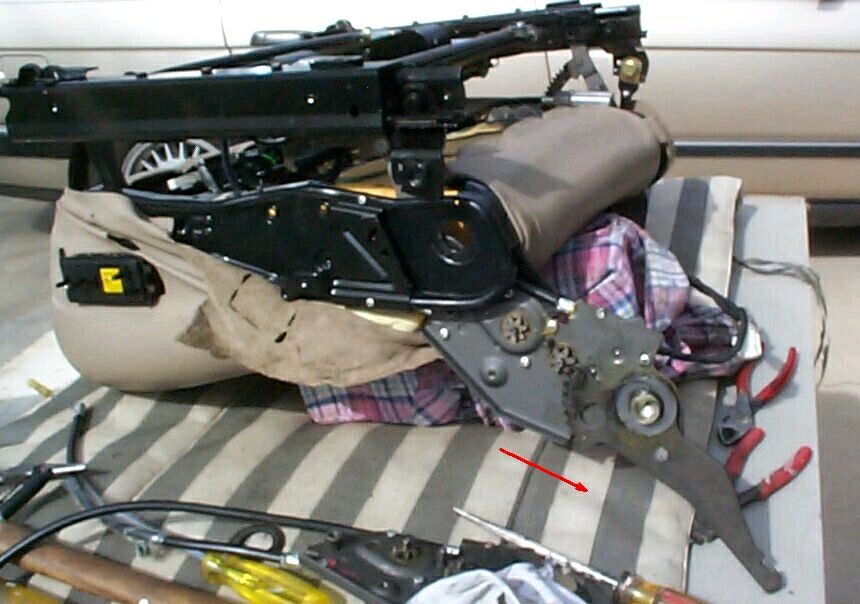 Remove the push-on retainer clip on the plastic wire harness clamp which is on a stud toward the rear of the inside of the gearbox: 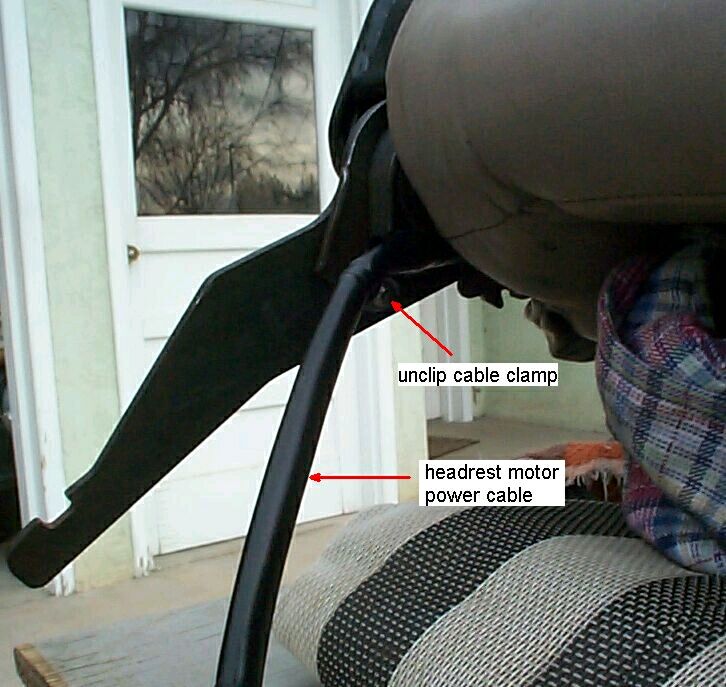 The gearbox on mine had a stripped nylon gear on the recline wormgear: 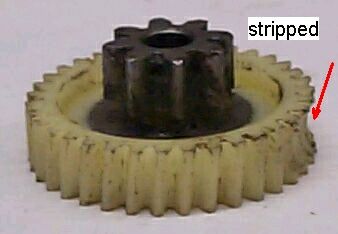 For this particular design, a good wormgear should have straight teeth. Mine is obviously worn round & not making good engagement with the worm.

If using a used replacement gearbox, now's a good time to do the "cable fix" if it needs it, while the gearbox is out on the bench. The motor end of the drive cables should extend about 1/2" to 5/8" beyond the end of the outer sheath when the other end is fully inserted into the gearbox socket. Also, it wouldn't be a bad idea to open the cover on the replacement gearbox to inspect the nylon gears for wear & grease the geartrain with vaseline. 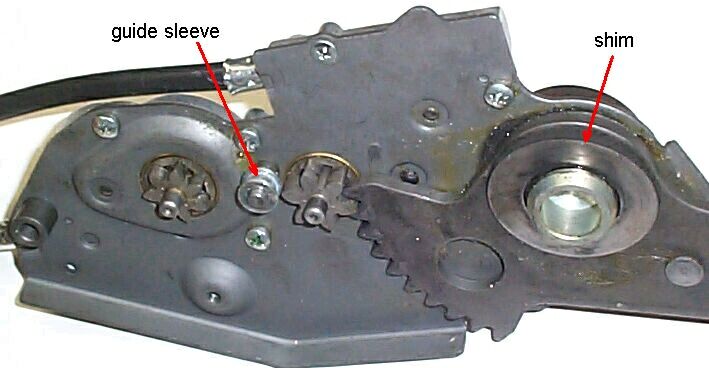 As usual, assembly is reverse order of disassembly. There's a shim that goes between the gearbox & the seat frame on the large stub shaft which has the circlip & clock spring. "Glue" the shim in place with some heavy grease, otherwise it likes to get caught in the circlip groove & keeps the stub shaft from going back into the seat frame all the way. There is also a small aluminum guide sleeve for the curved rack gear for the rear seat height adjust drive which goes on a post next to the pinion gear.