I once again will display here the great poster that Laurent produced for our performance there. 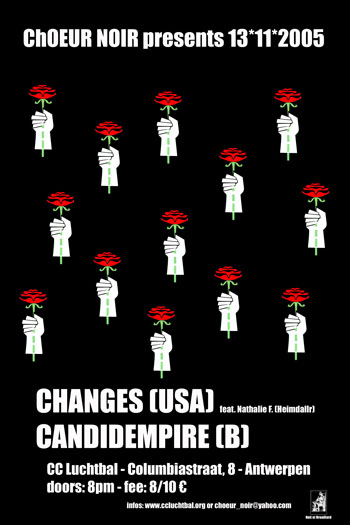 Sunday, November 13: There were three cities along this tour that were only one day affairs, Antwerp, Belgium, Budapest, Hungary and St. Petersburg, Russia. There’s a motion picture from the 60s which comically depicts a group of people on a whirlwind tour of Europe entitled “If It’s Tuesday, This Must Be Belgium”. Same feeling here except, in our case, the day was Sunday. This was also the first of three cities in which Nathalie F. would be accompanying us as a percussionist on stage, and she and our host Laurent greeted us at the airport. It was great to see Nathalie again and to meet Laurent. Even though Laurent took us all on a walking tour of Brussels when we arrived, to say that we saw very much of the city would be a gross exaggeration. It would be like saying that I had once visited Memphis, just because I had a layover in the airport there. We did, however, stop into a charming pub for some delightful apple beer and sausage, before embarking on the hour long automobile ride to Antwerp where we would perform that evening.

There was a synchronicity about this city of the tour. This day was, of course, November 13. The poster that Laurent created for this performance (above) had thirteen little gauntlet hand roses. When Robert and I arrived at the Lisbon airport for the flight to Brussels, the gate that our plane was boarding from was gate 13 and our seats on the plane were 13 B & C. And lastly, the audience for our performance, being the smallest of the tour, consisted of, you may have guessed it, thirteen people!

Though the audience was small the CC Luchtbal Theatre in Antwerp was a wonderful venue. With theater seats, good acoustics, a great sound engineer and a large stage, performing there was a real treat.

After the concert, we were to return to Brussels to stay the night at a hotel near the airport. Before leaving Antwerp, though, at around midnight, we stopped at a little Italian restaurant as we were quite hungry. The restaurant was about to close for the evening when we arrived, but they graciously allowed us entrance. We ordered a pizza and while we waited for it to be prepared and served we were entertained by our fantastic waiter. He sang Italian songs (very well, I might add) and kept us laughing with jokes and stories. And incidentally, the pizza was delicious.